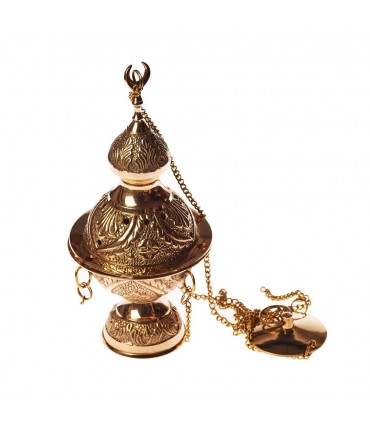 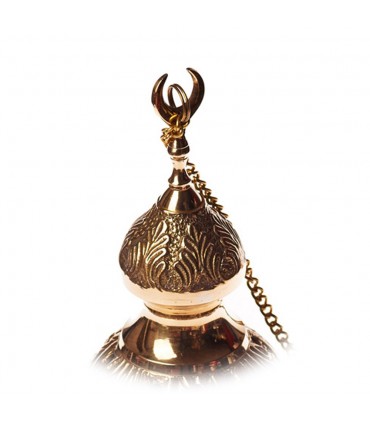 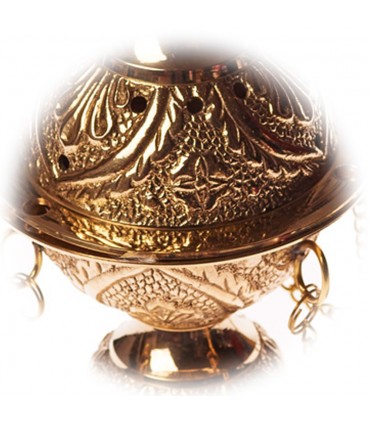 Censer with chainAndalusian style has three chains and a fourth to lift the lid. Due to its resistant chains it is possible to balance it in processions or holy week. High quality piece.

censer Perfect for brotherhoods and churches.

Ideal to burn incense in grain in fraternities and processions.

Includes a tray of ashes and measuring spoon.

Censer with chainAndalusian style has three chains and a fourth to lift the lid. Due to its resistant chains it is possible to balance it in processions. High quality piece.

Ideal to burn incense in grain in fraternities and processions.

Includes a tray of ashes and measuring spoon.

Thecensersor also called turbids , are containers for burning incense that is used in certain religious celebrations. They are known in Jewish antiquity and even in Egyptian and Greco-Roman, were adopted by the church from the first centuries, as recorded by historical documents and representations figured in frescoes and miniatures of codices of the High Middle Ages. But of them it does not seem that specimens previous to the XII century are conserved. The first incensarios had to have the form of urn with perforated cover and of the alluded paintings it is inferred that already from century X they took form of globe and had to be handled with three or four cadenillas. Since antiquity is considered in many cultures in a religious way incense as a purifier or debugger (from the point of view of magical thinking) as one of the elements of exorcism in various religions.

The holders of incense burners during Holy Mass are calledtour operators. 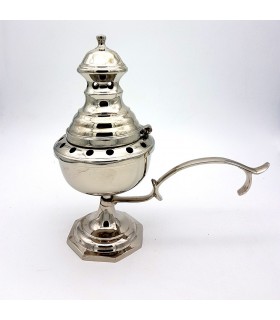 0 Review(s)
Censer Botafumeiro. Made ARTESANALLY in Spain, first quality product a botafumeiro for life. Bronze censer or nickel finish, with long handles and a high base to burn possible burns, great capacity to burn, in...
Add to cart
Quick view 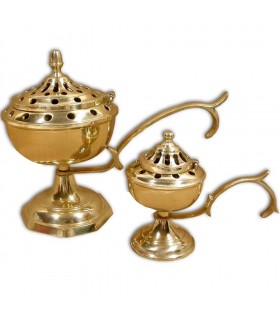 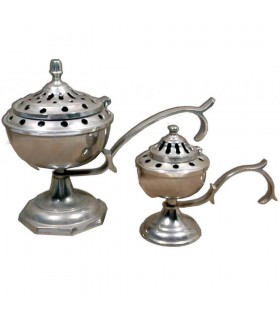 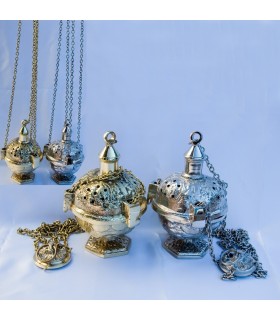 1 Review(s)
Engraved censer made in cast iron with chain grip and lid opening. Available in bronze or nickel.
Add to cart
Quick view 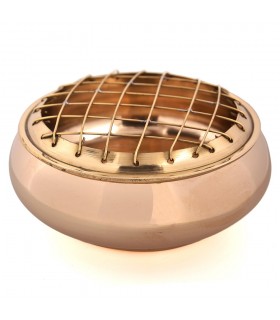 0 Review(s)
Bronze censer made by hand.It can be used for cones or grain incense.Chawaya model with metal grid.
Add to cart
Quick view 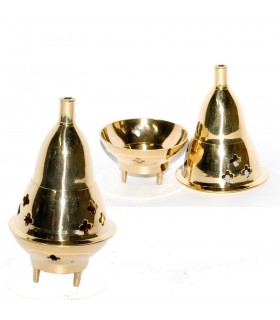 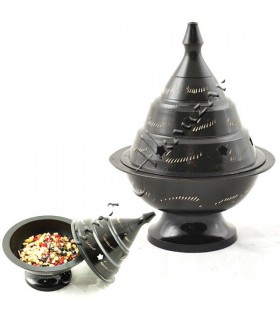 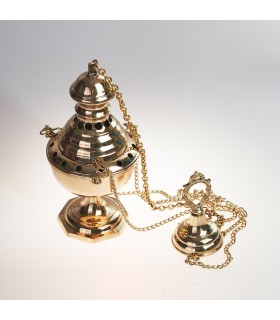 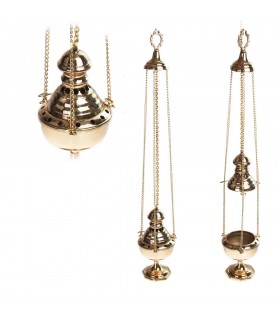 2 Review(s)
Botafumeiro incensario with chain handmade in Spain. Available in bronze or nickel plated. It has a chain with hook to lift the lid of the censer and let out the smoke.
Add to cart
Quick view 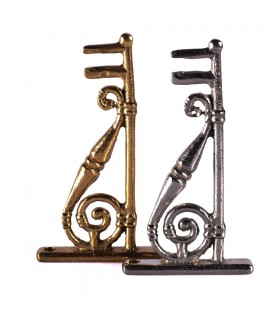 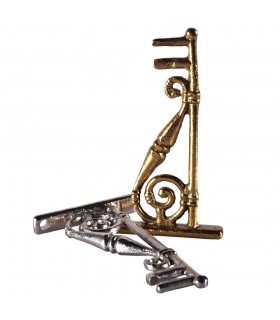 0 Review(s)
Support for censer with chain.There are two types, one made in bronze and another made of metal and bathed in níquiel. Ideal for hanging the censers while they are on fire or in decorative mode. Very elegant....
View more
Quick view 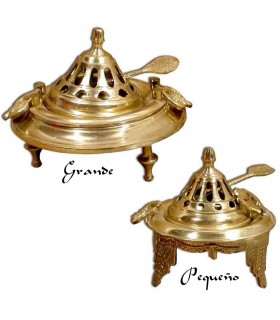 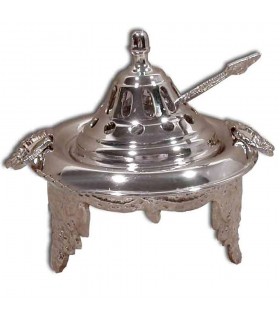 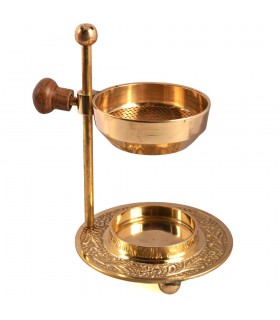 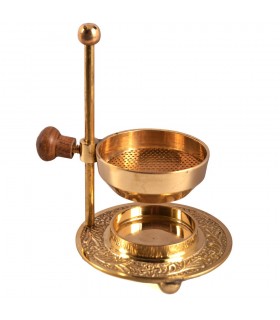 0 Review(s)
Bronze censer decorated with floral motifs.Burns incense with candle without the need to use charcoal.Regulates the amount of heat by regulating the height.Great quality.Made in IndiaMeasurements: 12 cm high x 8 cm...
Add to cart
Quick view 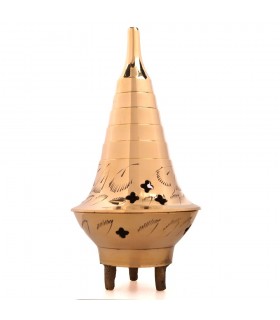 0 Review(s)
Censer of cones made by hand in bronze.Babel model.Its design is perfect for an ideal combusitón, thanks to its drafts of the walls since the tip is open so that the smoke comes out.
Add to cart
Quick view 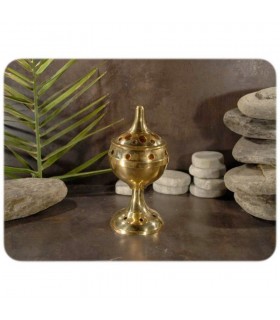 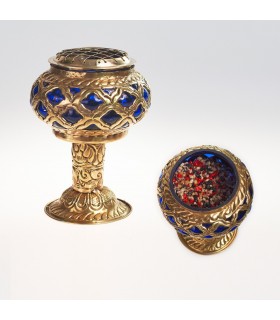 0 Review(s)
Censer made by hand with bronze on a glass base.Product of great quality very well finished.It has grid.When translucent can be used as candle holder.Measures: 15 cm high. *** Limited edition.
Add to cart
Quick view 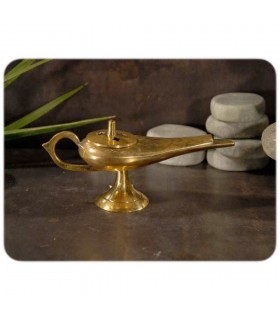 2 Review(s)
Aladdin censer made in bronze.The lid is removed to introduce the charcoal and incense in grain.It can also be used for incense in rods introducing it in a hole made in the center of the lid, very original.Decorated and
Add to cart
Quick view 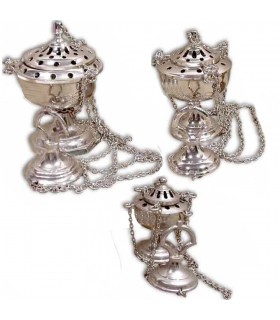 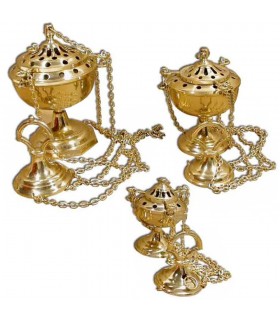